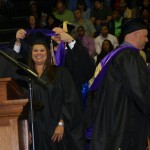 Theresa received her master’s degree in Criminal Justice in August of 2010, just 18 months after starting the program.

Roman philosopher Seneca said, “Luck is what happens when preparation meets hard work.” Add passion to the equation, and it’s easy to understand why Bethel University graduate Theresa Grisham has been exceptionally “lucky” in her career.

The West Tennessee native served as an Obion County Sheriff’s Deputy and dispatcher for four years, then worked in the juvenile court system for eight years, and then moved on to become Conference Coordinator for the Administrative Office of the Courts for the Tennessee Supreme Court. After four years in that position, she was offered the opportunity to serve as the Drug Courts Coordinator for the state’s Office of Criminal Justice Programs before returning to the Administrative Office of the Courts as the Education Manager, overseeing all the education for the Tennessee Judiciary.  Altogether, she worked for the Administrative Office of the Courts for a total of eight years. Today, Theresa serves as Deputy Director for the Tennessee Trial Lawyers Association, where she oversees the legislative, educational and administrative duties for approximately 800 individual members. It’s the pinnacle of a professional progression that she says was fueled by passion.

Always wishing to help others, Theresa enrolled as a nursing major when she first started her college career. “It was a struggle, though,” she recalls. “When I changed my major to Criminal Justice, it was a natural fit… It just never felt like work and I never looked back.”

Now living in Nashville, Theresa was inspired to undertake a master’s degree in Criminal Justice at Bethel in August of 2010. “Everyone I worked with had at least a master’s degree. More importantly, I realized that knowing more about the field was vital.”

It was her first experience with an online program, but Theresa’s adjustment was swift. “I travel so much for my job that it would have taken years to earn my master’s any other way,” she says. “I was able to do the coursework from my hotel room in the evenings, and once I got in the groove, it wasn’t difficult. I loved the fact that the classes are as mobile as I am.”

Theresa graduated just 18 months later. Being armed with a rigorous and respected master’s degree, she says, has made a real difference in her life. “working closely with attorneys, it allows me to speak on their level. Best of all, achieving a master’s degree has given me knowledge of the criminal justice system, and helped tie all my experience together.”

Due to recent national and global events, Theresa says the need for security and law-enforcement presence is understandably high. “Departments are always looking for good, honest people to help ensure the security and safety of our citizens, but the demand has never been greater than it is right now.” Whether seeking a bachelor’s or a master’s degree, Bethel is a smart choice, she says, “not only because it is convenient for those working full time, but because the quality of education at Bethel is a step above the rest.”