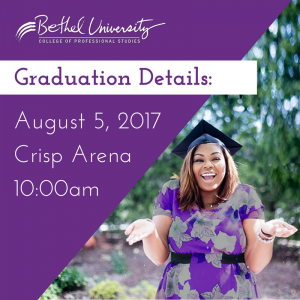 Summer 2017 Graduation will be Saturday, August 5 at 10 a.m for both graduate and undergraduate candidates. The ceremony will take place in the Rosemary and Harry Crisp II Arena which is located in the Vera Low Center for Student Enrichment at 101 Wildcat Lane.

It’s Bethel’s birthday – And our Essay Contest is one more reason to celebrate!

Bethel University is celebrating its 175th birthday, along with 175 years of life-changing opportunities! To highlight all that Bethel means to its students and graduates, we’re hosting a Bethel Birthday Essay Contest. The rules are simple:

The winner will be announced at the upcoming Bethel Birthday Bash at your local campus.

CLICK HERE to RSVP for a Bethel Birthday Bash near you.

Barry responded, “I told you that I’d get my degree – I just didn’t tell you how long it’d take!” END_OF_DOCUMENT_TOKEN_TO_BE_REPLACED

At 52 years of age, Walter “Bubba” Mullen was a bit older than most of his MBA classmates. A bit older – but even more eager to learn, grow, and challenge himself.

“I believe that if you’re green, you grow; if you’re ripe, you rot,” he says. “I knew that pursuing an advanced degree would keep me ‘green’ a lot longer.”

Mullen, who now serves as Vice President and Chief Information Officer for Alfa Vision Insurance, was heading up the two largest global Information Systems projects at Nissan North America when he first heard about Bethel in early 2013. Despite his unrelenting responsibilities and years away from school, he made up his mind to tackle the MBA program. Just 18 months later, he earned his graduate degree.

“My MBA experience at Bethel was fantastic,” he says today. “First, I loved the fact that it was a conservative Christian school with a challenging curriculum. As I began to compare different programs, I knew I didn’t want to just send off a check and get a diploma – I wanted to really learn something. Bethel was highly rated, cost-effective, and I could complete the classwork at the pace I wanted to. With one class every eight weeks, it was fast but focused.” END_OF_DOCUMENT_TOKEN_TO_BE_REPLACED

I had been a Paramedic and in a middle-management role for several years and wanted to move up, but the requirements for promotion always seemed to be just out of reach.  They increased from an associate degree (which I had) to a bachelor’s, which I did not have. Despite continuing to take college classes here and there, it seemed I wouldn’t reach my goal in my timeline.  I couldn’t see the end.

During all this jumping around from one school to another, I also found that I needed more structure and face-to-face instruction to really grasp my education and where I wanted to go.  I began looking at schools that could help me reach my goals, and Bethel was right there. It was convenient, I didn’t need to miss work, and if class fell on a work night, I could schedule the time off in advance.  We met one evening a week in a small class setting, which really appealed to me.  END_OF_DOCUMENT_TOKEN_TO_BE_REPLACED

I was in the first Nashville cohort class Bethel (then College) had in Nashville.  Before Palmer Plaza, we met weekly at a hotel on Music Row.  I graduated May 2, 2004, with a BS degree in Organizational Management.

I’ve worked for the Nashville Sheriff’s Office for over 25 years and I am currently the Director of the Security Services Division.  For the past 15 years, I’ve been assigned to the FBI’s Violent Crime/Gang Task Force out of the Nashville Resident Agency.  In December 2012, I graduated with the 251st Session of the FBI National Academy.  In 2014, my partner and I were peer-nominated and selected as Tennessee’s Top Cops by the National Association of Police Organizations.  We were recognized Nationally as two of America’s Top Cops, and presented that award in Washington DC.  In 2015, I was twice given the United States Attorney’s Office Award for Excellence in Law Enforcement.

My Bethel degree helped me move up through the ranks at the Nashville Sheriff’s Office and was instrumental in obtaining a command level position.  Additionally, the friendships I made during my time at Bethel have carried through to this day.  I have convinced several of my coworkers of the importance of completing their degree at Bethel University and many have done just that.

I just submitted my final assignment for the Accelerated Prep Course (two days early). This is going to be fun, man. I just wanted to let you know that the fact that you took time to meet me and sit down and talk with me face-to-face had a lot to do with my decision to go with Bethel. The insight that you were able to give me from the real-life, honest, homegrown-student perspective gave me the confidence to make a go at the online program.

With my career requiring me to travel quite a bit and sometimes keep odd hours, I really don’t think that I could commit to physically attending classes with no interruption. I spent over two full months’ time traveling for a week at a time, spread throughout last year. I have been on the road about a month so far this year. I just spent the week before Orientation in Atlanta at a best- practices sharing conference.

Having this much control and flexibility built into an online learning program is ingeniously tailored for the student/professional. I can log on, pop in my ear buds, and attend my lecture from Dulles airport in D.C. if I want (and I know that I will, without doubt, be in that very situation at some point). Thanks, brother. I hope this feedback is useful to you. I thought that you deserved it.”

I often hear people express their dream of achieving “perfect work-life balance.” While a wonderful goal, it is nearly impossible to achieve while tackling the multiple responsibilities of home, work, and school that are part of our busy lives. In fact, without focus, assistance, and a clear understanding of what “work-life balance” is, it may actually be beyond our reach most of the time. That doesn’t mean it’s impossible to achieve … but we have to know what it is to embrace it.

So what is work-life balance? In my opinion, it is a very rare period during which everything falls into place. You have abundant energy, money, and time to achieve every responsibility and every goal you have in front of you. Put that way, it’s easy to see that work-life balance can be fleeting, elusive, and frustrating – and nearly impossible to maintain.

As a general rule, the life of a busy, high-achieving Bethel student represents more of a “juggling act” than a “balancing act.” During a typical week, something will be left undone, someone will be left unappreciated, and new tasks will crop up faster than old ones disappear. Oh, and then there’s the guilt that comes from not being able to achieve the balance we all hear of. END_OF_DOCUMENT_TOKEN_TO_BE_REPLACED

Using correct grammar has helped me in many ways. It is important to know the meaning of words and how to use them correctly. There are certain words that sound the same, but have different meanings. It’s important to learn the difference in order to speak and write intelligently.

Being a person that was raised in a neighborhood where most of the people spoke broken English, helped me to make the decision to be different. My parents invested in my education by sending my siblings and me to a private school. With hardly any money left over, we lived in a low income area where people communicated with slang and incomplete sentences. END_OF_DOCUMENT_TOKEN_TO_BE_REPLACED

Meesh was unresponsive at the accident scene, and might have died were it not for a bystander who stopped and held her head as she gasped for breath.  When medical help arrived, she was quickly air-lifted to Tallahassee Memorial Hospital, where she was placed on a ventilator for the next 30 hours. END_OF_DOCUMENT_TOKEN_TO_BE_REPLACED