Student Spotlight: Michael Pope-It’s all About Helping Others | Bethel University 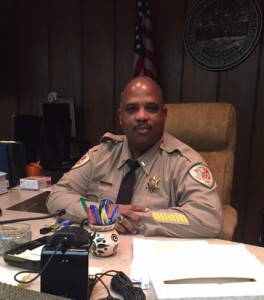 A career fair in 1987 changed everything for Michael Pope.Then a junior Accounting major at the University of Memphis, Michael had been planning a career as a stockbroker. But there was something different, something better about law enforcement. Michael moved swiftly from table to table at the career fair, applying for every department in the field.A few months later, the Shelby County Sheriff’s Office called, offering him a position as a deputy jailer. And from that point on, Michael says, “I never looked back.”

He knew he had found his calling. Despite his youth, he was able to serve as a role model and mentor to those who needed guidance. He had an opportunity to help, and a chance to make a difference.After serving as a deputy jailer for seven years, he was promoted to sergeant. By July of 1994, he was named Deputy Sheriff. Now married, his steady career progression gave him the life he’d always wanted. But one thing was missing: a college degree.

As he planned his next upward move, he knew that obtaining an undergraduate degree was critical to his success. “The commander of the jail kept telling me, ‘Go to school, go to school,’” he remembers. Michael listened, he did his homework, and he chose Bethel’s Criminal Justice program. 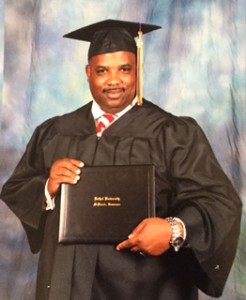 “I was working for Metro DUI at the time, and did all the sobriety checkpoints. I worked on holidays. I had no time to sit in the classroom,” he says. Bethel gave him an opportunity to fit school into his life, and real-life experience into his learning. In 2013, Michael Pope received a bachelor’s degree in criminal justice with a 3.3 GPA – all while balancing a challenging job and a growing family.

Not long after, he read a statistic that indicated only 8% of the population had a graduate degree. “And I knew I wanted to be in that 8%,” he says with a smile. So, after just a four-month break, he plunged right into Bethel’s Master of Science degree in Criminal Justice, graduating last December with a nearly perfect 3.9 GPA.

As a two-time veteran of Bethel University, Michael praises both the curriculum and the instructors.

“The facilitators were all very encouraging. They were willing to share information above and beyond the coursework, and they had real-world experience, as well as textbook knowledge,” he says. “I learned so many things, especially in the field of Human Resources. I learned to understand people better, both inside and outside the criminal justice system. Everyone in law enforcement has a chance to work with folks from all walks of life. But the classroom gave me a better, broader perspective.”

When asked if he ever shares information about the Bethel program with others, Michael laughs.“Let me tell you something – I’ve recruited about 20 or 30 people, and they’ve all followed my footsteps into the master’s program. “

Today Michael is a lieutenant who serves as the Criminal Court Division Commander in the Shelby County Sheriff’s Office. Among other responsibilities, he oversees the daily operations of the criminal courts, acting as spokesperson for the division while reporting his findings to the upper command staff. The position, he says, gives him an opportunity to demonstrate his abilities as a leader and problem-solver.

“At the end of the day, it’s all about helping others,” he says. And, along the way, Bethel helped him do that even better.