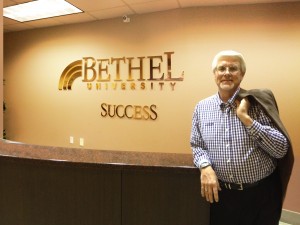 One of Anderson’s students, Amber Norwood, said it best in an email she recently sent to Bethel administrators:

“Mr. Charles Anderson not only taught us, but he really cared! He was truly inspirational … and gave us all feedback so we could grow.  Mr. Anderson stood out not only by motivating us, but believing in us. It takes ONE person to believe in someone else — and not only did he believe in me, he believed in our WHOLE CLASS. Mr. Anderson is a blessing to Bethel!”

Anderson knows the benefits of personal support firsthand. A graduate of the Success Program in McKenzie, he earned his MBA from Bethel University in 2010. Along the way, he had teachers like Lisa Vaughn spurring him on. “She took me on as a mentor, and told me I would make a good facilitator,” Anderson recalls.  It made all the difference in the world.

Today, Anderson teaches Group & Organizational Dynamics, Human Behavior in Organizations, Portfolio Development, and Strategic Planning in classrooms at the McKenzie, Jackson, Dyersburg and Memphis campuses. He brings more than just enthusiasm and empathy to the classroom, but a world of experience as a non-traditional student and employee himself.

Although Anderson enrolled in UT Martin at the age of 17, he attended for less than a semester before enrolling in the Tennessee Tech Center. Then, as Anderson puts it, “I graduated, got married, bought a car, and bought a house.” He also began a career at ITT Telecommunications in Milan, TN. When the plant closed 12 years later, he was hired as a draftsman at the Milan Tennessee Army Ammunition Plant.  Nearly 16 years later, after working his way up to a supervisory role there, he was told that a college degree had become a requisite for the position. So he enrolled in the Success program in October of 1997.

“I can’t begin to tell you the self-confidence it gave me,” he says. “Teachers sometimes saw things in me that I didn’t see in myself. I’ve always thrived on positive feedback, and Bethel gave me the opportunity to grow.”

It also inspired him to want to teach – and reach – students who needed that extra bit of support to thrive. “When I went through the undergrad program, I had a lot of good instructors. I could sense the satisfaction and pride they had with their work,” he says. “And I thought, ‘I can do that, too.’”

Anderson says the best instructors must first believe in themselves. Only then, he insists, can they help students build their own self-confidence.

Calling his classroom “an open forum,” Anderson says, “I bond with my students from the very first night. I’m nearly 61, and I’ve had a lot of life experiences. That helps students see that I’ve been through what they’ve been through,” he explains. “Sometimes they’re struggling, and just need somebody who believes in them and is willing to give them that little extra push.”

Anderson considers himself “very blessed” to have been given a chance to make a difference.

“Along the way, somebody believed in me,” he insists. “I’ve learned that if you can find one thing that each student does well – and really promote that – they can go much further than they ever thought possible!”