Meesh was unresponsive at the accident scene, and might have died were it not for a bystander who stopped and held her head as she gasped for breath.  When medical help arrived, she was quickly air-lifted to Tallahassee Memorial Hospital, where she was placed on a ventilator for the next 30 hours.

The 49-year-old Cleveland native spent a week in ICU with six broken ribs, a lacerated liver, a punctured lung, a fractured spine, and traumatic injuries in to two areas of her brain. She had suffered a lacunar stroke, making her weak on the right side, unable to stand on her own or even hold a fork. But the minute she was taken off the ventilator, the deeply spiritual patient regained consciousness – and started quoting scripture. “I guess when your conscious mind steps out, your spirit mind steps in,” she says with a smile.

After seven arduous days, she was transferred by ambulance to the Shepherd Center, a brain injury hospital in Atlanta. It would be her home for the next 21 days.

Her short-term memory began to return after just three days at the Shepherd Center. But her frontal brain was damaged, affecting her critical thinking, decision-making, emotions, appetite, and filters. “There are some funny stories about my filters not working: Imagine if you were to say aloud every single thing you think – well, you get the picture,” she laughs.  She had occupational and physical therapy every day; she was wheelchair bound by day and locked in her bed at night so she didn’t try to get up. Her family – husband Tim, daughters Taylor and Tatum, and son-in-law Zach — never left her side.

Meesh was discharged on October 9th, and returned home to heal. Just days later, she came to the devastating realization that she had lost both her mother and her best friend in the accident. “It wasn’t a bad dream after all. It was real. But God had decided, and I knew I had to take it one day at a time.”

The neurologist cleared her to return to work on Dec. 15, 2015. She called her new employer to tell them she was ready to return, only to be informed by HR that the company had restructured and she no longer had a job.

“I thought to myself – seriously? No car, no money, and now no job,” she recalls. “I said, ‘Come on, God, you promised me you wouldn’t put more on me than I could stand.’”

Meesh was starting her second year as a Bethel MBA student when the wreck occurred, but had withdrawn while she recuperated. When she was finally released to return to work – and had no job to return to — she thought, “At least I can get back in school.”

The coursework gave her something to focus on while she continued to heal. “My neurologist said it was the smartest thing I could have done: It forced my brain to re-route around the injury and reconnect to good tissue.”

It wasn’t until January of 2016 that Meesh learned her new position was open and ready for her. Eleven months later, on December fourth, she submitted her final MBA assignment. Sandra Meshelle “Meesh” Kidd will receive her graduate degree from Bethel University in January.

“God has been faithful throughout my life, and was with me every step of this journey,” she says.  “I believe the way we frame our issues significantly influences our attitude and impacts our outcome.  I don’t know why we wrecked, or why I lost my mom and best friend. But I knew I trusted God and that, somehow, I’d find a way through it.” 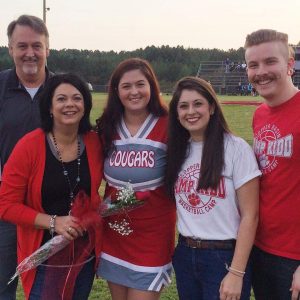