All For One, and Fun For All: Three friends share an academic adventure | Bethel University 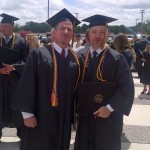 It’s been said that two’s company and three’s a crowd. But for John Bess, James Ritchie and Kevin Palmer, three was the perfect number for an academic journey at Bethel University.

The trio of retired soldiers met about five years ago, when all three were working for the Distribution Management Team, a Department of Army logistics agency based out of Fort Campbell.  James Ritchie, known as “Ritch,” was the first to enroll in Bethel’s undergraduate program.

According to John, “Ritch turned Kevin and me on to it.” Ritch admits that while sharing an office with Kevin, “we talked a lot about the program and the employment benefits we could receive from completing the degree.” Both John and Kevin “finally took the plunge,” he recalls, “and I became their unofficial guidance counselor/instructor as they worked toward their graduation. I was their ‘easy’ button,” he adds with a laugh. 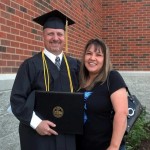 James Ritchie (2014) with his “darling and very supportive wife,” Crystal

But while Kevin says sharing the Clarksville campus with friends added a sense of familiarity and comfort, in addition to allow them to confer together on things they may have missed or misunderstood, earning a degree wasn’t a simple task for any of them. There were lots of late nights, and a good deal of juggling along the way. In fact, Ritch says, “the experience initially seemed pretty overwhelming. Being back in school after so many years was almost unfathomable. Balancing work, family and school was extremely challenging.”

Today, all three look back on an undergraduate experience enriched by caring classmates and instructors.

“Everyone shares the diversity each student brings to the classroom,” says Ritch. “It even builds on the socialization skills required to function successfully in the business world.” The culmination of the journey was graduating from the Management & Organizational Development bachelor’s program, which came in 2012 for Ritch, and Kevin and John in 2014.  “Graduation was a very proud moment for me,” Kevin recalls. As one of six children in his family, “being the only one to graduate from college was a very big deal.” John remembers feeling “an overwhelming feeling of accomplishment,” while Ritch describes being ecstatic that he could be a better role model for his daughter. “I think seeing me graduate provided her with a sense of direction, focus, strength, and the confidence of knowing she can do anything.”

It wasn’t long before the trio started considering the MBA program. “John and Ritch wanted to do it, and they sold me on the idea,” says Kevin. “Truthfully, learning had become very enjoyable by that point, and being able to earn a graduate degree was just icing on the cake.” Today all three hold Executive MBAs from Bethel University, and all have enjoyed the benefits, both personally and professionally.

To those still weighing the decision to return to college, the trio offers a wealth of encouragement, with just a hint of the former soldiers they are. “Stop putting it off!” says Kevin firmly. “Especially for military retirees, Bethel and the GI Bill make it inexcusable to not get a degree.”

“Do it!” adds John. “Your sense of accomplishment will skyrocket, and you’ll learn from some knowledgeable people. Best of all, it will validate the theory that you’re never too old to learn.” Ritch says the benefit of increased confidence is priceless, but all three look back on earning a degree with friends as an added bonus. With valuable lessons learned and six degrees earned, the friends from Fort Campbell show that sharing an academic journey makes the trip that much better.