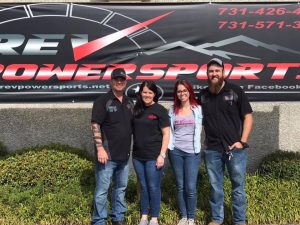 Many students are so inspired by Bethel’s Management & Organizational Development program that they dream of starting their own business. After all, the courses cover nearly every subject entrepreneurs need to know. But very few undergraduates actually launch a company while sitting in the classroom – and fewer still experience the success that student Collin Johnson has.

Johnson’s booming business started with a class assignment: Design a comprehensive business plan and present it to the class via PowerPoint. A former aviation maintenance specialist and licensed FAA airplane mechanic, Johnson dreamed of serving his community by combining his passion for business with his skills for vehicle repair. “As I put those ideas on paper, I realized it was a business plan I could actually use. Bouncing those ideas off the class was like having a room full of prospective customers.”

And that’s when Rev Powersports was born.

“I got laid off from my aviation job due to corporate downsizing in February of 2017,” Johnson explains. “I started working at FedEx, and it seemed like I was trying to open a door that wasn’t meant to be open.” So, while working and going to school, he began repairing ATVs and watercraft out of his garage. He joined forces with a partner who serves as head mechanic, and quickly built a customer base.

As demand for repairs of everything from lawnmowers to powerboats grew, Johnson rose to meet it. “I found a facility, invested some money, and it’s just grown from there,” he says of the Jackson-based business. “It may have started out of necessity, but it was fueled by desire and passion, and fed by the Bethel program.”

A native and resident of tiny Beech Bluff, Tennessee, Johnson attended four different colleges before finding his way to Bethel. None proved to be a good fit. Too often, he found that many of his teachers were grad students with no experience in the field, or the advisor-student relationship was nonexistent. Ultimately, he dropped out and got a job at a Cessna single-engine repair facility. While repairing corporate jets for almost four years, he discovered his love for management. But with more than three years of college and no degree, he had the nagging desire to finish what he’d started.

“My dad graduated from the Bethel Success program in 1999,” he explains. “He talked about what a great experience it was – and how perfect it was for busy adults.” The younger Johnson became the second generation to enroll in the MOD program and attend classes at the Jackson campus. “Attending class was one thing that really attracted me to Bethel. It suited my hands-on learning style,” he explains.  But what Johnson liked best was the interaction with other students. “Sharing experiences relevant to the topic in an open environment felt less like a chore and more like time spent with friends. My classmates were trying to improve themselves, just as I was.”

All of Johnson’s teachers brought real-world experience to the classroom. Among his favorites was instructor Charles Anderson, who taught Business Ethics. “He underscored the importance of ethics and morals, and the way you should conduct yourself in a business environment. Mr. Anderson was a company manager, so he effectively utilized both principles and application. He would tell us how to do it – and then tell you how he’d done it.” Ironically, Mr. Anderson was one of Johnson’s very first customers.

His last class now finished and graduation just a December walk away, Rev Powersports is thriving — and so is Johnson. With five employees, a 10,000-square-foot facility, and a supportive wife, he’s an exceptionally busy man who’s managed to juggle both goals and dreams.

But Johnson remains modest about his success, and credits Bethel for much of it.

“Bethel’s College of Professional Studies programs provide the best possible option for working adults, and an opportunity to finish what you started. I’ve tried them all, and this program is truly above and beyond,” he says. “It gives you unlimited potential.”

And, as in Johnson’s case, it might be just the thing to “Rev” up your future.