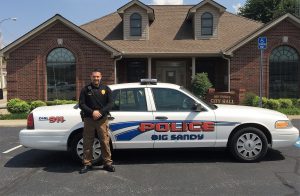 With just four classes left to go until graduation, Criminal Justice student James Sukach can look back on an academic journey that’s been anything but “uniform.” As Chief of Police in Big Sandy, Tennessee, he’s had a chance to improve the lives of the citizens in his care through his coursework.

The Connecticut native arrived in West Tennessee after a 21-year career with both the Marine Corps and the Coast Guard – most of it serving in law enforcement. In his final position, he was given the opportunity to choose from three stateside assignments. His first choice was Tennessee.

“There was an open position for a river-tender in Paris Landing,” he recalls. Having grown up in the tiny town of Hebron, Connecticut, the West Tennessee area seemed friendly and familiar. He took the job in the summer of 2009, working aids to navigation keeping the river channels marked for barges. The three-year tour of duty ended with his retirement from the military in November of 2012.

For the next three years, James searched for his next career and tried a little bit of everything: from a department manager at Lowe’s to driving flat-bed tractor-trailers over the road.  In the summer of 2015, while working as an armed security officer at Centennial Hospital in Nashville, he learned about an opening for a Chief of Police in Big Sandy. He put in an application, was interviewed by the mayor, and got the job.

It was all coming together: James had an exciting new position and a permanent home. The one thing missing from his life was a college degree.

“I had taken a couple of courses over the years, but just never had time to really focus on my educational goals,” he says. That’s when he heard about Bethel University’s online criminal justice program.

“It made professional sense to pursue a degree in criminal justice,” he says. “I had retired with post-911 GI Bill benefits which I knew would eventually expire. It fit my occupation and my goals, and I wanted to put those benefits to use.”

“All the local law enforcement – the Benton County Sheriff’s office, the highway patrol officers – highly recommended the program,” he says. “I checked the school out, and discovered it was one of only a handful of universities whose criminal justice program was endorsed by the FBI.” That stamp of approval meant a great deal to James. He did some research, made a couple of phone calls, and ended up talking to Bethel representative Rick Bankey.

“I had some butterflies in my stomach when I enrolled,” he admits. “But I had great support from Rick and the Bethel staff every step of the way.”

In fact, James says, he has “absolutely no complaint” about any aspect of the program. “From my advisor to the librarian to my instructors – I’ve received great customer service that’s been second to none.” And, despite his busy professional schedule and a personal life that includes his fiancée Sandra and three dogs, James has always found time for his coursework.

“For anybody who works a dynamic schedule, the online program is the way to go,” he says. “It’s nice that I can work on my assignments for the week when I can. The work is practical, applicable, and stress-free.”

James remembers attending Orientation in Nashville and hearing one of the presenters talk about needing to have “an appetite for learning.” James is hungry for his degree, and has learned to take it one bite at a time. The police chief urges other busy professionals to consider Bethel University. “After that very first course, I was like, ‘I got this.’ And if I can do it, you can, too.”