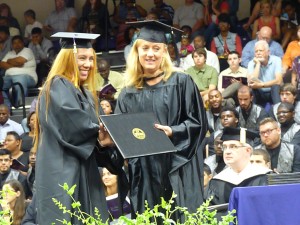 Bethel University held graduation ceremonies Saturday, May 10, 2014 on the school’s McKenzie campus, in the Rosemary and Harry Crisp II Arena. Seven hundred two students were Spring 2014 graduates while 504 students were graduates from the December 2013 ceremonies that were cancelled due to inclement weather. Three ceremonies were held throughout the day to accommodate the large number of graduates. The following degrees were awarded: Associate of Arts, Associate of Science, Bachelor of Arts, Bachelor of Science, Master of Arts, Master of Science and Master of Business Administration.

The Honorable Barrett Rich, a Tennessee State Representative, was the Spring 2014 Commencement speaker, while the Rev. Leonard Turner, minister of Union Cumberland Presbyterian Church in Knoxville, Tenn., was the speaker for the rescheduled December 2013 ceremony.