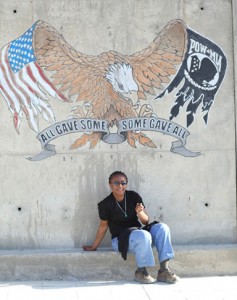 When Patricia Lewis enrolled in Western Kentucky State University in 1977, she majored in home economics and business, with a plan to open a tailoring shop after graduation. But as she entered her senior year, she was struck by the dual impact of a tough economy and a desire to see the world. A friend encouraged her to join the Army with her, and in 1985 she donned a uniform, heading to Germany as a wire systems installer in 1986.

“I didn’t enjoy the work,” she admits today. “But I learned how to make ‘fun’ of it. I made the best of the situation and I got to be good at it.” Patricia tried to complete her degree while she was overseas, “but I was out in the field so much, I just couldn’t do it.”

Time passed, and the somewhat reluctant soldier received promotion after promotion. She was sent to Fort Gordon, GA for nearly a year; took an extension on her enlistment, and did a tour of Korea for almost another year. Then, Patricia says, “God was definitely with me.” After a period of relatively mundane assignments, someone from the battalion anonymously nominated her to become part of the White House Communications Agency based on her professionalism, athleticism, and leadership potential. She found herself “serving our Commander-in-Chief,” who at that time was George Bush, Sr. Impressively, she rose to the rank of E-6 (Staff Sergeant) in less than six years.

Living in Washington D.C., Patricia’s duties “changed drastically,” she says. Her attitude also changed as her world opened up. “Most people get intimidated by rank. At the White House, four-star generals were nothing. I met heads of State – Nelson Mandela, President and Mrs. Clinton, and even the king of Morocco.” Her heady role would last for 11years, before being assigned to Fort Campbell in 1999.

Ultimately, Patricia was picked up for the position of Equal Opportunity Advisor on the post. By then, she had been in the military for more than a dozen years. She had seen much of the world. It was time to finish what she had started so long ago.

“I was driving down a road in Clarksville, and saw the Bethel University sign in front of the school,” she recalls. Patricia stopped and went inside, where a recruiter invited her to learn more about Bethel. “She asked me, ‘Have you finished your degree?’ Being me, I said, ‘No, have you finished yours?” she recounts with a laugh. “I was impressed when she said – yes, she had just graduated, thanks to Bethel.”

Patricia enrolled. An active-duty soldier, she nevertheless fit in with her new group of civilian cohorts, and warmed to her first instructor, Sandy Louden. Then, with just five more classes to go before graduation, Patricia got orders for Iraq. “I had waited so long, I was really disappointed. But I remember Sandy had said we would all hit bumps in the road, and that everybody goes through challenges on their educational journey. She promised that Bethel would work with us, no matter what.”

A year and a lifetime later, Patricia returned from Iraq. True to Bethel’s word, she was able to start where she’d left off, dropping seamlessly into an existing class at the Clarksville campus. “It felt different, because I didn’t know my new classmates. But I was like, ‘I am going to finish’!”

And finish she did, walking the line to receive her diploma in December of 2006. She was honorably discharged from the military the next year, and was hired as a civilian video/teleconferencing technician at Fort Campbell. The job took her to Afghanistan from 2009 to 2013.

Looking back on her determination to finish what she started, Patricia says, “I firmly believe knowledge is power. When you focus on what you already know, you can become afraid of learning what you don’t know. For me, I was never afraid – I don’t have the gift of fear,” she says. “Sometimes it’s hard, but I always believe there’s someone out there who’s willing to touch and teach, if you’re willing to open up.”

Now officially retired, Patricia is living life to the fullest. She recently climbed Mr. Kilimanjaro, and plans to visit Rio de Janeiro and Egypt next. “I’m 55 years old,” she says, “and I feel like life has just begun.”